Sorry but I needed to take my bye last week after the Eagles stole another defeat from the jaws of victory on Monday night. 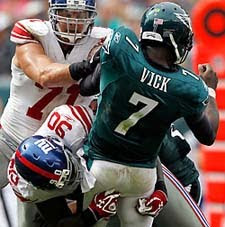 I almost gave up football completely. Sundays were beginning to get more stressful than my quarterly review. That’s when I remembered that I’m not actually on the Eagles and I’m not bound in any significant way to the team. This was a bag of bricks that should be easy enough to set down. I don’t have to set aside time to go to a bar to watch the Eagles play the Cardinals next week. And it’s a damn good thing I didn’t. Does that make me less of a fan? Of course it does. Do I care? Let me explain.

I am an Eagles fan living in Redskins territory. This is usually a non-issue as D.C. has both a very transient geography and a very underperforming football team. In addition to being an Eagles fan, however, I am also a rational human being. Root for whoever you want to root for and a little harmless trash talk is certainly appreciated. But next time I’m at the Susan G. Komen Race For a Cure wearing an Eagles visor in memory of my father who died of lung cancer, just think how important it is for you to blurt out “Eagles suck!” in a crowd of 50,000 people. Because I’m going to say “So does cancer.”

This is fanhood. A Grand Canyon-sized crevice in otherwise rational people’s thought processes. Or a normal-sized flat plain of land in idiots. And I fall into it just as much as everybody else. “Nice Cowboys hat. Are you from Texas?… No!?… Well then explain why you’re a Cowboys fan and if I don’t like it, I’m going to unfairly judge you for being less of a person than me.” What makes me better than you for rooting for the team from my local area? If anything, I should be rooting for a team that I admire for some other logical reason. More community service work, an interesting defensive scheme, shinier helmets. Loyalty to a team just because I was born close to their stadium is the antithesis of creativity. I should really be rooting for other things anyway. Like Detroit to actually get to the playoffs. The failure of Eli Manning, Mark Sanchez and Phillip Rivers is always fun. Or for Green Bay to go undefeated this year so we can finally put to bed that damn ‘72 Dolphins tradition of celebrating the week that the last undefeated team loses. It’s the most conceited and egotistical tradition in all of sports. Instead, I’m confined to root for a 3-6 team that is possibly the most underachieving team of all time against a division rival without their $100 million quarterback. And the answer is yes I do. Because I’m too scared to admit my theory to a society that isn’t ready for it. That said, E-A-G-L-E-S, EAGLES! Besides, I’m rooting for Eli’s failure anyway.

Bonehead Play of the Week: Marc Sanchez, who I’m still not sure why I dislike, called a time out on a 3rd down play with 1:27 left in the half when he could have let the clock run down another 30 seconds instead. They scored on the next play, but left Tom Brady enough time to drive down and score on the next drive, which ultimately made the difference in the game. Marc’s coach, leader of men that he is, called him out on national television about how stupid he is. J-E-T-S, JETS JETS JETS!

‘Nice Play; Don’t Ever Do It Again’ Play of the Week: As a punt returner, you are taught to plant your back foot on the 10-yard line and not to field anything inside of that. Patrick Peterson of the Cardinals opted to field a punt on the 1-yard line. Yes, the one. And he ran it back 99 yards to win the game in overtime. Nice play, Patrick. Don’t ever do it again.

‘Why Not’ Move of the Week: And in the “what the hell” category, Shanahan has decided to go back to Rex Grossman as the starter for Washington. I guess he has a short memory when it comes to the 11 interceptions he threw in the first 4 weeks of the season. Wow! You mean that didn’t work? Another 2 picks? I’m just glad they’re in our division.

Unbelievable Stat of the Week: Did Tim Tebow really win a game in which he didn’t complete a pass for the first 41 minutes of the game? And then he only completed two? Two complete passes in a win? I’d almost rather be 3-6. And then he managed to win again on Thursday with another horrible 56 minutes of crap and 4 minutes of blind luck. I can’t believe he has more wins than the Eagles. That’s the most disappointing part of the season.