Double Feature Duel (Rd2):
Planet of the Apes vs. The Invention of Lying 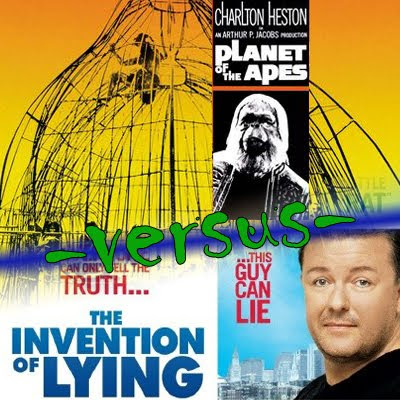 Old school classic vs a movie I didn’t even know existed. Let the game begin.

Title: The title of the movie throws off the scent of the ending in Planet of the Apes, which is enough to merit a point here. (Point, POTA 1-0)

Funnier: It’s like beating up a frog that didn’t even know he was in a fight. (Point, Lying 1-1)

Better Turn: Rocky Gervais told a lie vs apes finding out Heston could talk. And in a no contest win… (Point, POTA 2-1)

Better Ending: Talk about Mariano Rivera all you want, Rod Serling is the best closer of all time. (Point, POTA 3-1)

Better Message: Planet of the Apes was a warning about nuclear war and how it could destroy humans and we may be ruled by apes. Believable, no. But neither is living in a world where a woman will sleep with you because you tell her it’s the only way to stop the nuclear attack. Trust me. (Point, POTA 4-1)

Better Acting: Well, comparing a movie largely acted by humans in ape masks to one with a bunch of stand-up comics is not the easiest job I’ve had. However, I’ll take Louis C.K. over the plastic ape-people. (Point, Lying 4-2)

More Creative: A world where people can’t lie, but for one person who randomly comes up with it. Kinda stupid, but not necessarily uncreative. But the iconic image of the Statue of Liberty at the end of POTA floored people for decades. And that’s worth a point I think. (Point, POTA 5-3)

Watch again: If the two were on cable right now and I was by myself, I’d probably watch The Invention of Lying because it was funny. If the person I was with hadn’t seen either, I’d want to show them Planet of the Apes. But because it doesn’t matter anyway… (Point, Lying 5-4) 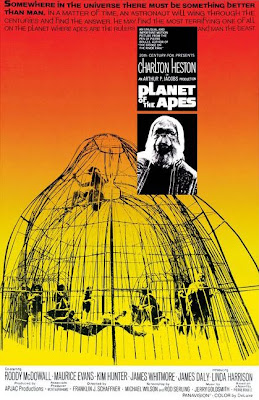