Happy Thanksgiving! I hope you all had your fill of turkey and cranberry sauce, which I’m still unsure of how it fought its way into this tradition. And I hope you all saw the refs and/or the NFL show how biased they are toward the Packers. Honestly, I want them to go undefeated and shove the Superbowl game ball up the ass of Maurice Morris. But it was embarrassingly clear that either the NFL issued that same sentiment to the refs or this officiating crew took it in their own hands.

There was a nice hit on Matt Stafford by Clay Matthews just as the ball was being thrown. Cool. Good timing. Approximately the exact next possession, Kyle Vanden Bosch made the same exact hit on Aaron Rodgers and was flagged for roughing the passer. There was also a flag for “pass interference” on the same play for playing defense against an Aaron Rodgers-thrown pass on the same play. And I can’t be sure, but I think I saw someone in black and white stripes actually throw a block on a punt return. 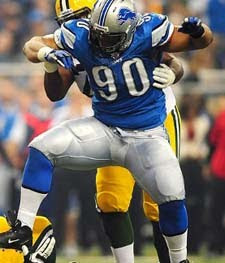 And to eject Suh from the game for simply trying to rip someone’s head off and stomp on them like a dirty turdhole? That seems excessive. What the NFL should do is actually wait until he kills someone. Because I think that’s where this guy is headed. He truly doesn’t think he did anything wrong. Much like Hitler. And yes, now I’ve compared a defensive lineman to Hitler. He’s that much of a turdhole. I wonder if he knows that killing is wrong.

Bonehead Play of the Week: It’s late in the fourth quarter. Odds of Sand Diego coming back are not good. Philip Rivers is chased out of the pocket and decides to throw the ball away. Rather than waste all that energy throwing it out of bounds, he throws it to the open field. And he gets picked off. This is not his year. He can’t even figure out how to throw an incompletion.

Bullshit Call of the Week: I’m not a fan of taunting. Or DeSean Jackson. Or cranberry sauce. But I am a fan of proper officiating. After a crucial 55-yard pass play from the 5-yard line during which there was a defensive penalty, Jackson flipped the ball at some players on the Giants sideline and did that “Look at Me” nonsense that makes me wish we’d bench him for the rest of the season. He drew a taunting flag and the penalties offset and the Eagles had to replay the down from the 5. But because the taunting came after the play, it should have been dealt with separately, after the outcome of the play had been determined. I’m not bitching here about judgment calls, because refs have a hard job and they miss calls in the speed of a game. I understand. I’m bitching about the rule interpretation, which a team of 7 officials on the field, given time to set their footing over the calls made, absolutely need to get right. That said, DeSean Jackson is a little bitch and I’ve given up on the Eagles already, so I don’t mind it that much.

Fantasy Dud of the Week: Week 10 was an amazing time for John Skelton. It looked like he was the next Tom Brady, if Kevin Kolb was Drew Bledsoe. He came out with 32 fantasy points and a fourth quarter comeback against the Eagles (surprise, surprise). Week 11. The 49ers have been pretty good, but there was no stopping this guy, right? Wrong. 99 yards passing and 3 picks, no TDs. -2 points. And he played all game. Yikes.

Hard Luck Team of the Week: Well, the Colts have a bye, so I’ll leave them alone. Besides, they lost Peyton Manning. Everybody knows why they’re losing. But I have no idea why Miami only has 3 wins. Especially after their 35-8 drubbing of the once high-flying Bills. It’s like they’re not even trying to win the Andrew Luck sweepstakes anymore.