Double Feature Duel:
Rise of the Planet of the Apes vs. 12:01 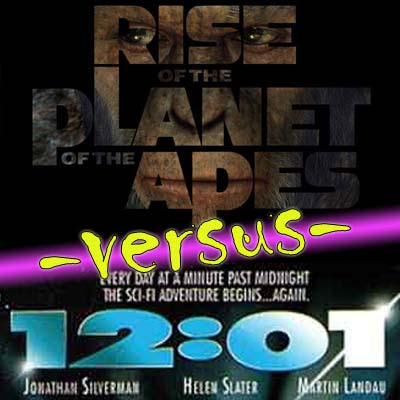 Bout #17: Jenn was out of town (Afghanistan – so WAY out of town), so I took advantage and went to the movies with Matt to see the new Planet of the Apes. It was awesome. Then I rented an old, cheesy 80s flick recommended based on my appreciation for Source Code. It didn’t suck.

Rise of the Planet of the Apes: I already spoke at length about the awesomeness of this equal (see my review). 10 bugs

12:01: Groundhog Day meets Can’t Buy Me Love. Some cheesy 80s actor wakes up on the same day over and over – only its scientifically explained – and tries to save some cheesy 80s actress. And it works and they kiss in a very inappropriate place at the end. But it didn’t hurt anybody. 6 bugs.

Funnier: I was visiting Jenn’s family down in Texas and her nephew daddy asked if I had seen the new Planet of the Apes movie. I was excited. Finally, I was going to have a legitimate conversation with him about something I liked! I blabbed on about the impressive storyline and the homage to the original series. He retorted with “I didn’t like it. It wasn’t that funny.” And then we talked about football. (Point, 12:01 0-2)

Better Turn: After living in the Ape Imporium for a while, James Franco finally bribed the right guy to get Caesar back out. Then Caesar shut the door on him. Bad ass. (Point, Rise of POTA 1-2)

Better Ending: Picture the most cheesy ending of a Moonlighting episode ever. Well, 12:01 started with that and added some more soft lighting. (Point, Rise of POTA 2-2)

Better Message: Though mostly for entertainment purposes, Rise of POTA brought up some legitimate points in relation to testing drugs on animals. If you’re going to do it, make sure it doesn’t make them smarter than us. (Point, Rise of POTA 3-2)

Better Acting: What percentage of a character needs to be human for it to be nominated for an Oscar? 50? 65? Because I’d like to see Andy Serkis get nominated for his role as an ape. (Point, Rise of POTA 4-2)

More Creative: Rise of POTA would probably win this in a landslide on another day. But 12:01 gave it a run for its money. Actually, nevermind that. (Point, Rise of POTA 5-2)

Poster: It basically stole the Quantum Leap light motion lines and the clock from Groundhog Day. Not to mention the plot. (Point, Rise of POTA 6-2) 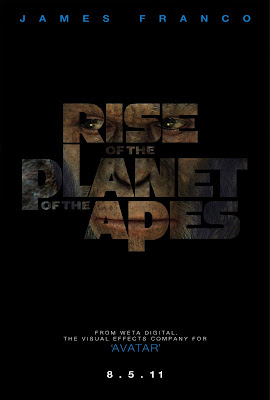