Double Feature Duel:
Battle for the Planet of the Apes vs. The Weight of Water 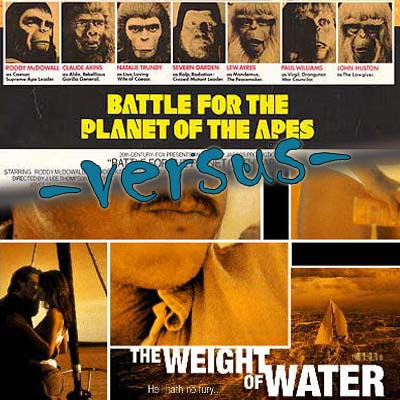 Bout #18: The last in a series of movies I am almost obligated to finish vs. the best looking of the 6 DVDs at my father-in-law’s house in Texas. The other 5 have got to have been better.

Battle for the Planet of the Apes: Maybe they made this for the money, maybe they did it to wrap things up, like Lost’s final episode. I don’t know. It was 38 years ago. But the result is a movie that tries desperately to tie together 2 distinctly different versions of how the apes came to power. The first and second movies of the series seem to suggest it was a nuclear war. The third and fourth tell us it was an ape from the future that led a rebellion? Oops! This last film has the daunting task of trying to put together pieces of a puzzle that don’t fit. And they did not do as good a job as Lost did. And that’s a TV show. 3 bugs

The Weight of Water: What the hell did I just watch? Why was this movie made? It’s a fake reporter reporting on an old fake crime that nobody in the first fake part of the movie cares about either. Which is obviously how I feel about that original fake and the fake fake part. 0.5 bugs.

Title: By far, the title was the strongest part of this fake movie. It went downhill and spiraling off a cliff from there. (Point, Weight of Water 0-1)

Funnier: Ugh. I can’t remember a single laugh line from either right now. I’ll base this point on the least painful. (Point, Battle 1-1)

Better Turn: I’m still trying to figure out what the hell happened in Weight of Water. When was I supposed to start caring about anybody or anything that happened? (Point, Battle 2-1)

Better Ending: The goal of Battle was to bring things full circle back to the original of the series. The goal of Weight of Water was just to be done. (Point, Battle 3-1)

Better Acting: Possibly a bright spot in this otherwise lousy movie. But I guess it’s easy to act depressed when you know you’re making a shitty movie. And I always err on the side of not being in a plastic ape costume. (Point, Weight of Water 3-3)

More Creative: I guess I’ll give it to Battle, for having its back up against a wall with its mission anyway. I don’t know if it successfully put together all the pieces from the different puzzles, but it at least took its mission seriously. I guess. (Point, Battle 4-3)

Poster: Weight of Water has 5 pictures on the front cover. The big one is of Sean Penn. Two are of boats on water, one is a chick in a bikini and another is of two chicks lying naked in bed together. At least the film knows its selling points. (Point, Weight of Water 4-4)

Watch again: I can’t believe this ridiculous movie made it this far. But I guess it’s not exactly up against The Nines. Here’s hoping I never have to see Weight of Water or really either movie again. (Point, Battle 5-4)

Overall: Everyone’s a winner in the Special Olympics. Not here. Winner: Battle of the Planet of the Apes (5-4) 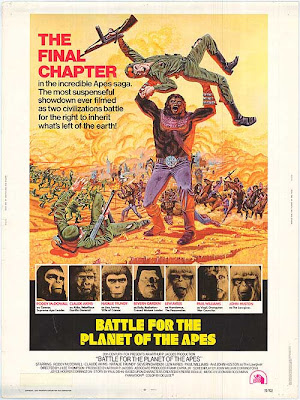