Double Feature Duel:
The Brothers Bloom vs. Planet of the Apes (2001) 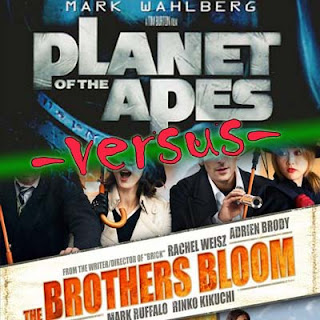 Bout #19: A movie that Annie made me watch vs. Tim Burton’s bastardization of a franchise I’m kind of tired of watching. Any predictions?

The Brothers Bloom: Quirky, different, funny – everything I want from a Dirty Scoundrels remake. No, the entirety of the story didn’t add up completely, but I really like the characters, especially everybody except Adrian Brody, strangely. 7 bugs.

Planet of the Apes (2001): Boy did Tim Burton drive this into the ground. My guess is he just wanted to have a reason to make a bunch of slightly more ape-looking apes than the 1968 version jumping around. And he wanted it to be darker. But he didn’t necessarily want the dialogue or plot to make any sense. But it was still less painful than most of the original sequels. 3 bugs
Title: Yeah, I know. It’s a freakin sequel. But y could have done something. (Point, Brothers Bloom 1-0)
Funnier: I believe the first line in POTA 2001 was a mockery of the “Take your stinky paws off me, you damn dirty ape.” And it went over like grape juice in David’s Bridal. (Point, Brothers Bloom 2-0)
Better Turn: Well, the Brothers Bloom was full of turns, much in the style of Maverick. POTA started turning with the opening credits. Mark Wahlberg established a relationship with a chimp, went on an unsanctioned mission, got shot through a wormhole in space, crash-landed on “some strange planet” and got captured by the apes all before I even put the DVD in. But in the con game style of movie, we enjoy the constant turns, much like the teacup. Because we know they’re coming, but we don’t know when or which way. (Point, Brothers Bloom 3-0)
Better Ending: The ape version of Lincoln is Burton’s way of coming up with an ending as shocking as the original. He could have also had a huge race of apple-headed people for the same effect. (Point, Brothers Bloom 4-0)
Better Message: I really don’t feel like thinking too hard about this category and I know the stupid POTA movie is going to lose so I invoke the I’m Tired and Moving Things Along clause. (Point, POTA 4-1)
Better Acting: I take back what I said earlier. Paul Giamatti made for a rather comical ape and a bright spot in this film, possibly the only reason to ever watch it again. However, I fell in love with Rachel Weisz in this movie. And I fell in like very much with Mark Ruffalo. Rachel really played her quirky millionaire who “collects hobbies” to perfection. I have already started putting more of her movies on my Netflix queue and that’s usually a good sign. And poor Paul Giamatti has lost this category all three times he’s appeared since this started (The Illusionist, Storytelling). In fact, he’s lost all three duels. Hmm. I’m gonna have to watch Sideways again. (Point, Brothers Bloom 5-1)
More Creative: I guess there’s something to be said for random being creative. Kinda in the same way Jackson Pollack was creative. But Pollack happens to be the butt of my jokes for good reason, so any comparison to his creativity is not a compliment. (Point, Brothers Bloom 6-1)
Poster: Well, I like how they stayed true to the font of the old movie. And I kinda like the ominousity of the POTA poster. And I know it already lost so I’m not spending much time thinking about exactly which one I absolutely completely and without a doubt like better. (Point, POTA 6-2)
Watch again: No question. I’m invoking the I’m Tired and Moving Things Alongclause again. (Point, Brothers Bloom 7-2)
Overall: I don’t think I gave the POTA a chance at all based on the stupid, stupid ending that is stuck in my head. I almost forgot completely about Paul Giamatti. But that should show you how bad it was. The right movie won. Winner: Brothers Bloom (7-2) 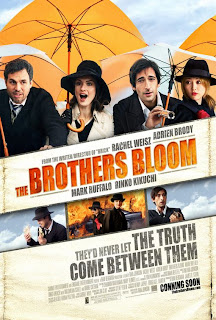