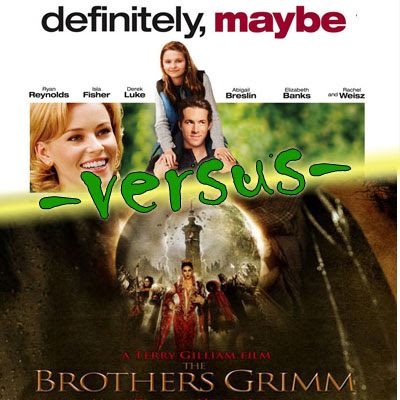 Bout #20: A romantic comedy with my new favorite actor and actress vs. a movie I accidentally got because I thought I was putting Brothers Bloom on my Netflix queue.

Definitely, Maybe: Ryan Reynolds is half of a divorced couple who is guilted into telling Abigail Breslin, his middle school daughter, about how he met his mother – sans the Bob Saget voiceover. In an above averagely clever twist, he disguises the names of the three main women in the story so his daughter doesn’t know which one is her mother. One of the women is Rachel Weisz, hot off Brothers Bloom – at least in my world of viewing movies. Romantic comedy, romantic comedy, romantic comedy… the end. 7 bugs.

Brothers Grimm: It’s a dark fairy tale that thought it was a lot funnier than it actually turned out to be. It had surprisingly bad special effects and expected the audience to care about this undeveloped love story. I was unfooled and unmoved and struggled to stay awake to the end, which was not the payoff I was hoping for either. 2 bugs.

Title: Not a lot of movies have commas in the title. Oh Brother, Where Art Thou and Sex, Lies and Videotape are the first that come to mind. It’s a very underutilized punctuation symbol. It gave proper pause to those that had the patience to read it that way you’re supposed to read a comma. (Point, Definitely 1-0)

Funnier: You know how sometimes a comedian tells a punchline so unfunny, he has to indicate it was a punchline that to the audience with a vocal inflection, a raise of the eyebrows and a little lean forward because even though the joke wasn’t funny, he can trick some of the audience members into laughing because they’ve been conditioned to do so? Well, Brothers Grimm desperately tried to do this with cutaways and music. It fell just short of including a rim shot. And I was not tricked. (Point, Definitely, Maybe 2-0)

Better Turn: However weak and confusing the story actually was, the plot point in which the con men run into actual paranormal activity they have to deal with is enough to win this point, as it is difficult to figure out exactly which rejection/reintroduction of which woman constitutes the turn in the romantic comedy. (Point, Brothers 2-1)

Better Ending: If you could stay awake to find out what the ending of Brothers Grimm was, congratulations. (Point, Definitely 3-1)

Better Acting: I don’t think Matt or Heath are winning any Oscars for this. And when you’re going up against the guy from Two Guys, a Girl and a Pizza Place, what do you expect? (Point, Definitely 5-1)

More Creative: Brothers Grimm was creative in a way that Jackson Pollack was – which is to say that it wasn’t. Sorry, art students who have to pretend you understand stuff you don’t, but it’s just paint splattered haphazardly on a canvas. And now I’m not talking about Pollack. (Point, Definitely 6-1)

Poster: Both sell the type of movie they are very well. Definitely, Maybe is bright with happy people, the three women are looking at Ryan Reynolds with Abigail on his shoulders, while Heath and Matt are staring intriguingly at the camera surrounded by dark shades of brown with a crystal ball sphere of some sort hanging around. I’ll give Brothers a point for the intriguing “Once Upon a Time” tagline. It doesn’t say too much and it’s not silly as all hell. (Point, Brothers Grimm 6-2)

Watch again: I accidentally got Brothers Grimm this time. Turns out I had already seen it but I barely remembered it because I likely fell asleep the first time too. I may rent it again if I ever get really bad insomnia. (Point, Definitely 7-2)

Overall: Not that I didn’t see Brothers Grimm losing to any other movie, but I’m looking forward to seeing if a straight up romantic comedy can make some waves in the Oxford Quadrant. Winner: Definitely, Maybe (7-2) 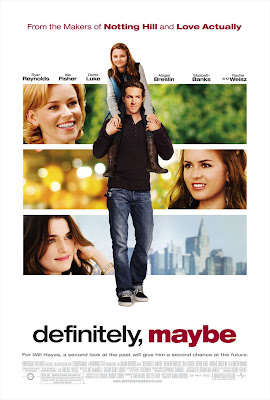