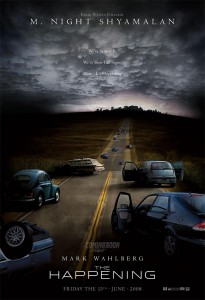 My promise to never watch another M. Night Shyamalan movie came into direct opposition with my promise to see every Zooey Deschanel movie when I found out she was in it. Zooey won. I lost.

I tried a few times to see this movie before and something always happened to get me out of it. But after (500) Days of Summer, I was on a ZD tear. And so I found myself wasting a 3-day Netflix DVD period along with a 2 hour chunk of time when I should have been practicing my route to the hospital. Then I actually watched the bonus material in hopes I would explain how some people thought this terrible movie was not. My mind was largely unchanged.

M has a knack for taking 2-page fables and stretching them into 2-hour stories. His pacing was delightful and tension-building in Sixth Sense and Unbreakable, but nails on a chalkboard slow in The Happening and Signs and Lady in the Water and probably a few others I haven’t had the misfortune of seeing. And maybe it’s because of the payoff, because they’re pretty much the same. But if you put all your chips into tension leading up to a reveal, you better have the right card. “Is this your card?” it said to me at the end. No, I have the 6 of spades. That’s a napkin from the Cheesecake Factory.

Also, I understand that M is trying to get his characters to be mysterious, but he seems to have a knack for bringing out the worst in actors over the age of 14. I’d say he need to stick to [fill in the blank], but really, I think he just got lucky once and has been riding that credit for the last 8 movies. OK, M. Back to my promise to never see your movies again. 2 bugs (out of 10)

Just finished watching The Muppets and The Smurfs back to back. I’m waiting for Josh Radnor’s version of Scooby Doo to be announced sometime next year. 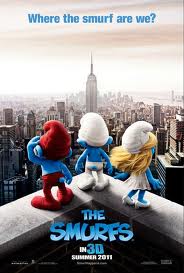 Seriously, this is the second movie in a row with a How I Met Your Mother star acting alongside of my childhood television cartoon/puppet characters with largely the same result. Only I got the sense this movie figured out what it wanted to do. It was just too cheesy for me to really buy into, even as a kid’s movie.

Hank Azaria is excellent as Gargamel, basically reprising his role as dogwalker from Mad About You. And Azreal (the cat) had probably some of the best moments of the show. She (He?) played a perfectly unaffected cat with her (his?) own agenda, as cat’s should. If she (it) had a spinoff, I might go see that. But it’s unlikely I’ll be waiting in line for Smurfs Two. Unless of course, the CEO (Mabel) wants to go see it when she turns one. 4.5 bugs (out of 10).

Apparently, there hasn’t been a Muppet movie made since 1999. And apparently, How I Met Your Mother decided that was long enough. 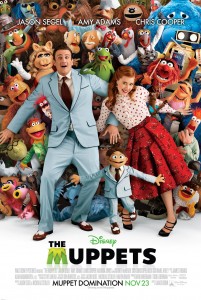 This movie started out with a couple obvious problems working against it, mostly the concept of audience. Is it a throwback movie for the adults who grew up with these guys? Or a kids movie with characters they aren’t yet familiar? Or is it an awkward hybrid that tries to cater to both audiences and instead isolates both? Why yes.

A lot of people are praising Jason Segal for this movie for some reason. It is pretty entertaining, but just can’t figure out who it is geared towards. He either set out to make a kids movie and lost his way or he set out to make a Muppets throwback.

In the end, I was left saying “Oh yeah, I remember when I used to like that. That was like 30 years ago.” 4 bugs (out of 10). and decided to throw in some stuff for the kids. I can appreciate trying to cater to both. The Shrek and Toy Story franchises managed this balance quite well. But this movie felt like material written for 30-something nostalgia buffs, as it basically parodied the old Muppet TV Show, but had the type of childish humor society praises 30-somethings for having outgrown. Only the childish humor wasn’t even good for the children as it was coated heavily in tongue in cheek. 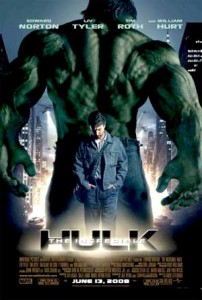 I almost didn’t watch this one before my Avengers viewing because Ed Norton got booted for his inability to play well with others. Looks like he took that role of Hulk a little too seriously. Also, I should have listened to that part of me that said I could skip it.

We all know the story of the Hulk. A guy who gets pissed off, turns green and can’t control himself. And we love him for his story because we all want to have the same lack of accountability for our behavior when we get angry. Sure, they hide behind the mask of gamma radiation and stuff like that, but that’s why we love Hulk. Yet, we need him to try to be a better person or we can’t justify our love for him. Yes, we are all complicated, insecure sheep and Hulk shines a light on that.

Here, the Hulk hides deep in some 3rd world country to try to overcome his Hulkiness and deal with his anger in positive ways. But he is summoned by either a need to help his old friend or a possible cure. Instead, he accidentally lets Tim Blake Nelson, the forgotten guy from O Brother Where Art Thou, harness the chemistry within him, only to be forced to inject it into Tim Roth, creating an unstoppable force with no desire to make himself a better person. Thus creating a matchup worthy of a comic book. Which is where the last 45 minutes of this movie felt like it belonged.

It had its moments, but whereas I can buy Captain America and even Thor as it’s being sold to me, the Hulk seems silly and out of place. 4 bugs (out of 10).

If you’re like me, your most resonant memory of Thor is his cameo in Adventures in Babysitting. If you’re not like me, you probably enjoyed the movie. 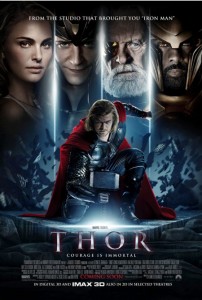 This is actually a gross overexaggeration of how I felt about the movie. But I didn’t know anything about Thor going into the movie, so all this was new. I knew he was strong and had a hammer, easily confused with Tom Silva. I didn’t know he was an arrogant power-hungry demi-God from another realm extradited to earth for disobeying his dad.

I thoroughly enjoyed the planet earth stuff. His interaction with the humans, specifically the Natalie Portman human, was light-hearted and fun. All the stuff with the ice people that happened on another realm interested me a lot less, possibly for the same reason I never read comic books as a child. This makes me apparently opposite of most critics, which I’ll accept without argument. The screen time was split pretty close to down the middle between realms, which was a little too fairy tale for me. I preferred the Stellan Skarsgard “Next time you tase him, make sure he’s already in the car.” Because he was heavy and because there’d be no need to tase him if he was already in the car. See, that stuff was funny. More time on earth in Thor 2, please. 4.5 bugs (out of 10)