Every once in a while, I’ll run into a movie I remember liking as a kid and I’ll watch it again as an adult to find out how stupid it was. War Games is not that movie. 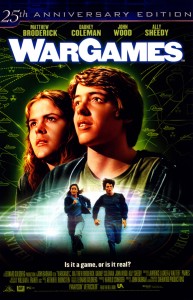 I almost didn’t watch this. It was trapped on one end of the DVR with 10 other movies like Top Gun and The Adventures of Buckaroo Banzai in the “just in case” section. Thank you, forces that pointed me to this one. I don’t need to see Tom Cruise shirtless anymore.

Apparently, hackers call this movie the most accurate hacking movie that’s been made. It’s possible that was only true for the time, but I’ll take that. It was much more intelligent than I remember. It opens very strong with an ELE scenario and progresses to show how this hack could actually spark the end of the world.

We all remember Broderick hacked into a computer thinking he was playing a game but he was really simulating war on government computers. Well, what I didn’t remember was the complexity of the government involvement, the crazy doomsday guy who backdoored this code and the false bottom at the end of the movie. Had the movie ended when they figured out how to stop the game from launching, it would have been great. But the second ending, with the computer shutting out all human interaction and simulating war from all different vantage points, was a surprise and perfection. I even forgave it for the cheesiness of “the only way to win is not to play.” Especially when it ends on “How about a nice game of chess?”

This movie is brilliant for its time and unlike most, can stand up still today. Ally Sheedy was even understated, which is a good thing. 10 bugs (out of 10).

Wow. Viola Davis is a shoe-in for Best Actress this year. Oh wait, Merryl Streep is in a movie. Oh well. 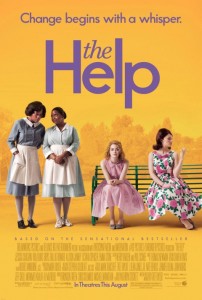 The Help appears to do something that most movies can’t accurately do, make me appreciate and understand what it was like to be in someone else’s shoes. And not just someone else, but someone extremely else. It’s the same reason I love Changes by 2 Pac, even though he stole my boy’s melody. And yes, Bruce Hornsby is my boy. You know he beat Allen Iverson in three one-on-one basketball games in a row? Pretty cool for a three-time Grammy award winner.

Emma Stone, in her least bangable role to date, plays a rare educated woman in the south who aspires to be a writer of some sort. She sees the coloreds as equals. So we know she’s one of the good folks. Bryce Dallas Howard, who just made us all hate her in 50/50, is at it again. And we hate her even more this time. Of course it’s not too hard to play the role of villain when you’re asked to be a racist bitch.

Emma turns to Viola to help (that’s really how the film got its name) with her cleaning advice column. Then she gets the idea to write a book from the perspective of the help (or maybe it was that). To most of us modern day folk who didn’t experience overt racism on that kind of a scale, it’s tough to understand the mindset of slavery back then. But this comes from a time period where they didn’t think smoking was bad for you either. So let’s just say we know better now and move on.

There are some very moving scenes, some very funny scenes and some very predictable ones too. It’s worthy of the Best Picture nom, but not the win. Well done once again, Academy. But it still doesn’t make up for that Tree of Life bullshit. 7.5 bugs (out of 10).

A documentary about the ridiculousness of the art world was referred to me by the other half of The Bungling Idiots, notorious ragers against the art circle jerk machine from our UMBC days. How could I resist. 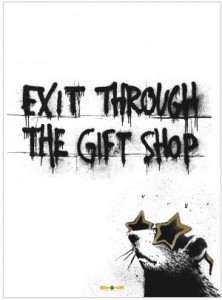 I have already spoken about how I think the art culture is mostly just a circle jerk of snobs who bind together so tightly to the movement that the laymen figure all these people can’t possibly be wrong. And no, I am not necessarily more articulate than that. I need to focus my rants when the rage starts to reach critical levels. Anyway, this documentary was supposed to poke fun at the world of art and the guy who told me I needed to see Memento before it left the theaters recommended it to me. And I was able to stream it right to my iPad while sitting on my couch. OK. I’m sold.

It starts by following a guy who was doing a documentary on the world of street art, something he fell ass backwards into. That was interesting enough, showing the guy that made the Obama posters and the Space Invaders guy, etc. Then it turns out that Banksy, one of the bigger street artists was actually the mastermind, doing a documentary on this documentarian when he falls ass backwards (maybe it’s the way he walks) into a successful art career based on misinterpreted advice, mass marketing and the circle jerkers’ inability to admit to being duped (and tell they’re being duped).

If this documentary is real (there is speculation that it isn’t, based on Banksy’s reputation), it encapsulates everything that is wrong with the art world and gives me an opening and closing argument in every conversation I have on this topic. Either way, it shines a white hot spotlight in the shape of Marcel Duchamp on art critics, collectors and fans and what they consider to be “art.” 7.5 bugs (out of 10).

Yeah, I watched this movie as an adult. 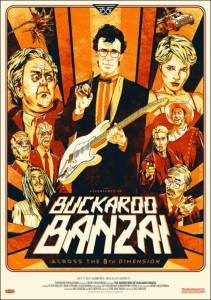 I remember this movie being a quirky Indiana Jones ripoff from my childhood. So when I stayed home sick from work with all the intentions in the world of buckling down and focusing on getting stuff ready for the move and maybe finally doing some baby-birthing related research my wife would respect (not just watching Bill Cosby again), I saw this on whatever channel has stupid old movies nobody watches and just sat still for three hours.

It was weird. The main character was a neurosurgeon astronaut in a rock band, among other things. His nemesis was an insane John Lithgow (was there any other kind in the 80s?). There was some weird stuff I only half-followed (which was enough) about aliens who look like us and walk among us unless you have this special potion or wear certain classes or something.

Long story short, it was interesting and completely worthy of watching on a sick day from work by myself. But probably under no other circumstances. 5 bugs (out of 10).

One of the most resonant pieces of advice I got from the teaching staff in my M.F.A program is that if I’m going to holding out to only make it into paying publications is like waiting for a tree to fall so you can get Direct TV. You can either cut down that tree yourself, overpay for cable or just get Hulu Plus and go to the bar to watch the game. Boy, I wandered into this analogy unprepared.

The point is that in addition to my weekly column for the SpeakeasyDC blog, I also am writing a weekly column for SoMuchSports.com. This is called the “Quick Inside Slant: Impressions of the 2012 NFL Season as perceived by a Creative Writing graduate student, part-time amateur stand-up comedian and collegiate intramural flag football legend.” So far, I have one article up and the webmaster told me it’s a hit. And because I can’t afford to go to computer lab after computer lab inflating the page hits, it would be nice if you clicked it out once in a while. Thanks and I’ll see you on the other side.

SpeakeasyDC blog: Tips of the Trade

So Much Sports: Quick Inside Slant