Review of The Ides of March
It takes an arrogant person to name a movie after one of the most famous Shakespeare plays ever. And George Clooney is just the guy to do it. 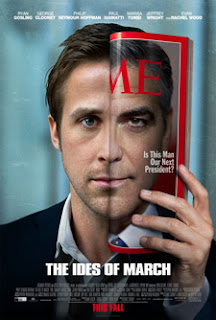 The title would lead you to believe this was about a betrayal of a friend starring George Clooney as Julius Caesar and Ryan Gosling as Bruté. Only I don’t recall Caesar sleeping with his interns, and if he did, it was probably not as frowned upon in that time period and he probably bragged about it.
Regardless of ill-advised Shakespearian comparisons, this movie went nowhere for an hour. I’m all for character development, really I am. But it’s usually a bad sign once I start to wonder why a movie exists in the first place. I didn’t know if it was supposed to be a political commentary I wasn’t getting or if it was supposed to be wowing us with the peek behind the scenes of a political campaign, but I was having trouble justifying staying up passed 11pm on a Friday to continue watching this. I actually thought maybe it was based on a true story because it was so boring.
Then finally something happened. The girl is pregnant. It’s the governor’s. The assistant campaign guy she’s now sleeping with pays for her abortion. He gets blackmailed about another thing. Something about a delegate happened. He blackmails the governor he works for (so there IS backstabbing!). But for the right reasons. And in the end, it turns out there is no innocence in politics. Close-up of Ryan Gosling. Roll credits. Lesson learned. George Clooney pats himself on the back for just being George Clooney.
The pacing was awkward, I didn’t know what or who I was supposed to be paying attention to, the lesson was cliché and the payoff was not worth the investment. This could have been another Bulworth with a wayward politician with progressive ideals that doesn’t play the political game. There were some good speeches written into the film. But it decided to go the other way and give into blackmail and bribery. And for some reason, it overdramatized these scenes like it was brilliant and the audience wouldn’t see it coming. My wife summed it up once the final credits started when she said “That’s it?” 2 bugs (out of 10)
Stuff I did for Class. I’ll explain later. 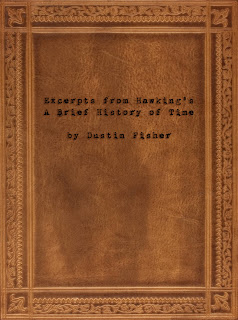 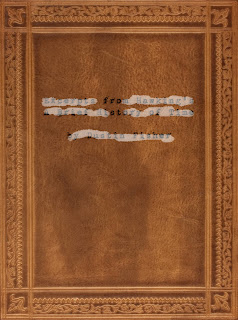 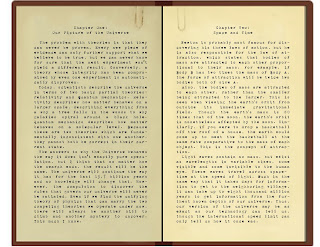 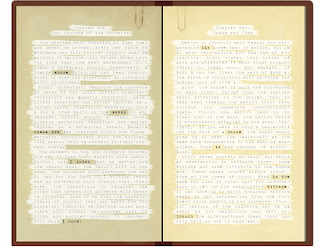 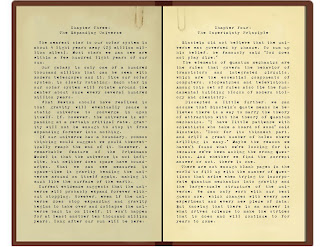 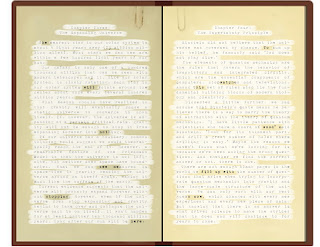 Review of Contagion
This long awaited sequel to 12 Monkeys teaches us that if you cheat on your husband, you’ll start a worldwide outbreak of a rare disease that kills 26 million people. So keep your hoo-ha in your skirt, ladies. That’s what Jude Law is really trying to tell us. Also, bats and pigs shouldn’t hang together. 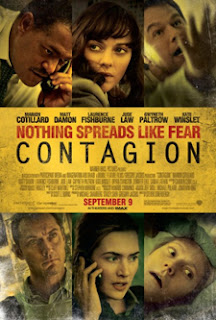 This movie starts out in a hurry. It’s got shit to do. Gwyneth Paltrow contracts the disease, flies back to the U.S., cheats on her husband and dies in the first 7 minutes. And it does not jog in place to let you catch your breath. It just darts straight across the intersection without looking and expects you to keep up. Matt Damon plays the husband and step-father and the movie cuts back and forth between the effects this outbreak has on the family and the global impact of it. Every scene introduces another big-time actor and had some issues trying to give them all screen time, as evident by the fact that Marion Cotillard was in the movie for less than 6 minutes.
In addition to Gwyneth, Matt, Jude and Marion, Lawrence Fishburn, Kate Winslet, Bryan Cranston and even Demetri Martin fell out of Comedy Central and made it into this movie. But the real story was the story. And more specifically, the specifics. This movie did its homework, or at least was intelligent-sounding enough to seem like it. It was the Blue Chips of disease movies. In addition to the chemistry behind the disease, it tackled the social implications on a micro-level with the janitor working at the CDC lab and on a macro-level with Jude Law’s internet propaganda character, making sure this movie was at least a little more than just a remake of Outbreak. Oh yeah. Elliot Gould was in this too.
Soderbergh leads us in one direction with a character, while he tucks the little foam ball into the faux-thumb on his other hand. In the course of 10 seconds, the internet propagandist we all thought was exposing the CDC for its handling of the viral information – traded places with that CDC official in the eyes of the audience. Soderbergh still tidies up the film by making sure every character is either good or bad, but at least he bothers to switch it around on us from time to time. And much in the way he handled Traffic about 10 years ago, he wove together all these self-contained vignettes into a quilt where you can still see some of the seams, but it keeps you very warm and you don’t have to hide it when company comes over. 9 bugs (out of 10).
Review of Moneyball
I really wanted to like this movie more than I did. But I didn’t. I only liked it exactly as much as I did. At the heart of it, it was still just a formulaic underdog sports movie, complete with audio-driven video montage in the middle of it. 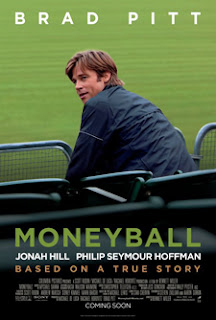 Here’s my issue with the movie. Brad Pitt starts out by making it to the playoffs with money problems. In baseball. Not basketball, where 4 or 5 teams get to the playoffs every year with a losing record. It’s pretty prestigious. Then his three best players leave for bigger contracts, so he tells his staff they need to start thinking differently. How?Well, I don’t know. Bring me a rock. No, that’s not the one. Bring me another rock. Nope. That’s not it either.
Then he meets Jonah Hill, who has a nice looking rock. So he buys it and goes all in with it. It’s a fun concept and I love the idea. But in the end, they get to the playoffs and prove to the world that they can do just as well as they did last year. People all around say “good try.” I know it was based on a true story, but it’s not billed as an educational documentary like Inside Job or The Cove. And after over two hours, just when I expected some sort of climax, there was white text on a black screen saying that he revolutionized the way people looked at the game and his idea brought success to another team. Oh, and not just any team, but the team that took his star player from him, who happened to be Jonah Hill’s example of somebody that this method has proven is not valuable.
Que?
So the movie instead overdramatized the record-setting 20-game win streak in the middle of the season only to immediately dismiss it when Brad Pitt admitted the streak meant nothing. The goal was a World Series. Which they didn’t achieve. What do you want us to feel, movie people?
That said, I enjoyed the idea they were striving for, combining sports and math as more GMs should. I’m hoping to see somebody like that pop up in football and revolutionize the way we view 4th and 1. Maybe that’s how I’m going to make my millions. Mostly, I enjoyed seeing Brad Pitt and Jonah Hill in scenes together, even when they weren’t saying anything. They drove the audience through this convoluted math problem in a way that made us feel good about it. And the baseball scenes were so well-handled, I forgot most movies screw this up. On another note, can we please stop making 60-year-old managers wear a baseball uniform to work? They look ridiculous. 6 bugs (out of 10)
Review of the Descendants 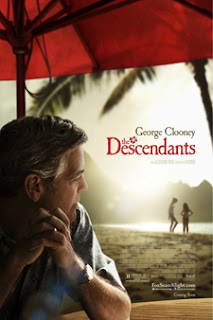 I stole this movie. I’m a 37-year old man sneaking into movie theaters. And I’m not ashamed. I was, however, terrified of getting caught. Some attendant kid walked into the theater about 20 minutes into the movie and my palms started sweating. He knew. There were only 7 of us in the theater and I was the only loser by myself. I thought if I just remained motionless that I’d have a better shot at going unnoticed. It’s important to note that it was a human attendant. Not a brown bear. He stood there for a minute, spoke into his shoulder (I assume there was a device there, not just the little attendant angel and devil), and left. I scooted over to sit with another couple just in case. But the cavalry never came. I guess the non-bear attendant just wanted to make sure there were no kids making out or videotaping or playing Words with Friends or anything.
As for the movie, it was mostly about a “back-up parent’s” relationship with his daughter when the mother gets a coma. Turns out she was cheating on him too. Before the coma thing, of course. If you like movies with awkward fathers trying to relate to teenage daughters, this is up your alley. Or if you just like to look at Hawaii or George Clooney for a few hours, ditto. The characters are three-dimensional (in the way they are written – not in the Avatar way) and the plot gives them a chance to span the gamut of emotions.
The plot gets going when George decides to try to find his wife’s (misteress? mister? cheatee?) and tell him that she’s in a coma. Turns out that dude is the guy from Without a Paddle. The one that’s not Dax Shepard or Seth Green. So be ready for that. I wasn’t. And he’s married to Judy Greer, whose name is cleverly disguised as Julie Speer in this movie. Really? That’s not a lot of effort, movie people. Also, the daughter was allowed to bring Jar Jar Binks on this mini-vacation for some reason in the form of a teenage stoner who also turned out to have some merit in the end without breaking his character, but only after annoying the hell out of this viewer for 90 minutes.
There was some business element to the movie that I couldn’t really follow. Something about selling land to build a golf course and that’s bad because the locals don’t want tourists. I guess we should all just live in our houses and not go anywhere. Is that what you want, Hawaii? Without this element, the movie was great. I cared about the emotions a husband has to deal with when a cheating wife dies and he’s suddenly in charge of raising his two daughters. But then the movie turned into a romantic “save the land” morality play that wasn’t fully developed. It took away from the closeness of the family. Thankfully, the end brought it back with a short dialogue-less scene in which the father and two daughters sit down on the couch, sharing some ice cream and watching March of the Penguins. That sums up the movie. It doesn’t try too hard to force the family dynamic into the story. Because it doesn’t need to. 7.5 bugs (out of 10)