Gorgatron, Lord of the Cicadas

First of all, let me preface this by saying that I’m probably more proud of this than I should be. A few friends of mine threw a cicada party over the weekend. I thought that it was just a regular party called “The Cicada Party” to kinda justify having a party for those people who need a better reason than getting drunk and passing out on 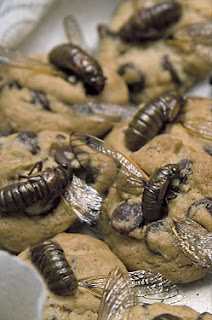 a floor covered in potato chips and salsa. So I later heard through the grapevine that there would actually be a live cicada eating contest. The gag reflex you’re probably all feeling right now was my first reaction also. And if that sentence disgusted you, stop reading now. Because it was more than just a live cicada eating contest that made this a cicada party. I showed up and they had old bay cicadas, chocolate covered cicadas and cicadas in taco meat with taco shells and all the fixins. They had posterboard up for anybody who tried the different kinds to write their name down. And in this particular setting, people were impressed by these sort of accomplishments. I later realized that these accomplishments were not met with the same respect and reverence at work. In fact, I think I made Mike gag so much, he started to sweat.

So anyway, these posters were up there just begging for people with low self-esteem struggling to fit in to shove a dirty chocolate covered insect down their throat to earn a spot up on the wall of fame. And so I did. And then some hot chick convinced me to eat an old bay one. They really do taste like shrimp, by the way. But so does everything you douse in old bay. I had thought about signing the poster below it which would have entered me into the live cicada eating contest, but not after seeing the tupperware container full of them sitting outside. If you were even close to on the fence about eating a live cicada, seeing about 100 crawling around each other in a see-though plastic hell was enough to turn you vegan. It looked like something out of an Indiana Jones movie. And so I played flip cup. And then I played beer pong. And I don’t remember specifically, but I probably played asshole too. At some point, I was swayed by either peer pressure, large amounts of alcohol, or a curiosity of my own competitive limitations when it came to winning something, and I signed up for the live cicada eating contest.

Honestly, I knew that nobody would give me a shot, but I knew my mind over matter reflex would trump the gag reflex to at least earn me a ride to the second round. I suppose it’s also possible that I just don’t give enough of a shit about my body to care what I eat. Or maybe it was the last 10 straight years of eating UMBC food that has 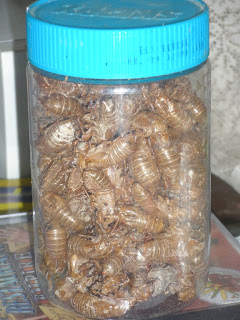 prepared me. At any rate, I got to the next round. Before I had realized it, I was eating cicadas like they were jello. Crunchy, squirming jello that flaps its wings for a half second, but jello nonetheless. And after a photo finish determined a tie and I had to go head to head with Joelle, the hostess of the party, she punched me in the throat when it looked like I had gotten ahead of her. She was fined $50,000 by the league. So at this point, I made it to the final round, which combined agility with cicada eating. I was possessed at this point. I could have probably eaten a squirrel if somebody handed it to me. Anyway, after completing the two rounds of beer pong and flip cup and cicada eating, I came out a second ahead of the other guy. This marked several firsts in my life. It was the first eating contest I had ever won, it was the first cicada-related activity I had ever participated in, and it was the first time I ran sprinting to the bathroom to puke and had absolutely no desire to. That was weird. I expected to feel a whole lot worse after eating what turned out to be about 24 cicadas. Nothing. I was ready to go play flashlight tag. I had no ill effects at all. But for some reason, I couldn’t sleep all that night. Maybe cicadas have caffeine in them too. So anyway, I am the Lord of the Cicadas until the summer of 2021. You may refer to me as Gorgatron.

I think we showed them who the more dominant species is once and for all.

Lord of the Cicadas,