Well, I’m running out of movies that I have seen recently, so it’s looking like you guys are going to have to get on 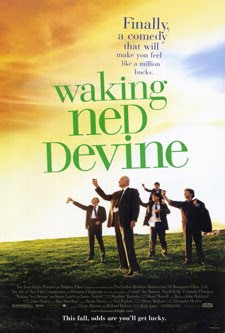 the ball and start taking me out to see movies. Either that, or I’ll start doing movie reviews on stuff like Shaft and C.H.U.D. Actually, my calculated free time for this coming week, having factored in jobs one through three, is less than half the week. And I’m considering sleep free time. Two waiters/waitresses went back to school and four were fired in the last week. And we were already short two more than we should be to run the restaurant correctly. So now I’m working virtually every vacant hour that I’m not at jobs number one or three. But that’s not what I’m here to tell you.

Waking Ned Devine didn’t suck, I’ll give it that. And it didn’t have to carry the burden of coming in second to A Bug’s Life. We actually tried to see Waking Ned Devine and did it. Though, I was outvoted 2 to 1. I still wanted to see A Bug’s Life, but already knew before I got to the theater that I wasn’t going to. It was a different degree of letdownedness. Anyway, the movie had a good premise, which is what attracted me to it. A guy dies and the entire small village tries to convince the city folk that somebody else is Ned Devine. The movie started to pick up around three quarters of the way through it. I counted two particularly funny parts. And one was the very end. I’ll give them credit, that was really freakin funny. In fact, it was so funny, it makes most of the people that see it leave the theaters thinking it was a good movie, and they don’t realize until they get home that the movie wasn’t all that exciting. Case in point, I left the theater with Mike and Good Joe and Joe was raving about how funny the movie was. I told him he was wrong. The movie was really boring, just with a really good last five minutes. To this he lost the excitement in his voice, dropped his shoulders, started to frown, and replied “Hey… you’re right.” Folks, if that’s not proof enough for you, I don’t know what is. And it did the thing that could possibly annoy me most about movies, other than overdramatized, poorly placed slow motion. It was a completely ficticious film, and it ended with text telling us what happened in the future to each character. IT’S A MOVIE!!! How the hell can I take that seriously? And the movie also had the token unnecessary sappy part. This was even more out of place than the one in Patch Adams. And by the way, I later found out that Patch Adams was based on a real story, which I knew, but I didn’t know his girlfriend had died for real too. That sucks. For both me and him. Well, I’m still not adding any bugs for that fact. Speaking of bugs, I think I’m gonna give Ned and pals 4 and a half bugs for tricking us to thinking that the movie wasn’t as boring as it actually was.

This quote took me by surprise, and thankfully, I had already put the Keoki Coffe down, or it might have wound up in somebody’s lap. I was asking a table of three at Bennigans for their order. At the time, I had gotten to a guy who ordered a T-Bone steak. This sparked the following conversation…

Me: “The T-Bone comes with two sides. What would you like?”
Guy: “I guess I’ll have both the top and the bottom this time.”